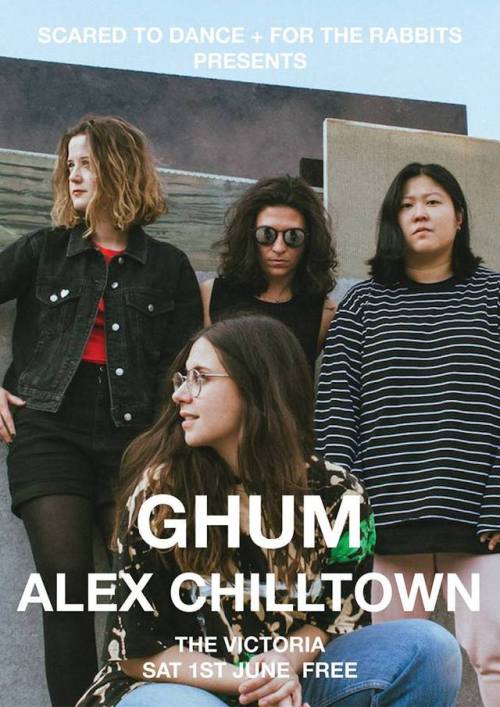 GHUM headline the Scared To Dance and For The Rabbits gig night at The Victoria. Entry is free and support comes from Alex Chilltown.

Originally from locations as diverse as Spain, Brazil and the musical hotbed of Essex, GHUM have since gone on to become one of the most exciting bands in the fertile London DIY-scene. The band initially formed when band-member Marina put an advert on Gumtree, and the quarter bonded over a shared love for The Cure, Warpaint and PJ Harvey.

The band caught the ear of many with their self-titled EP back in 2017 and have gone on to take their post-punk-grunge-goth across both the UK and Europe, including dates with the likes of Dream Wife and L.A. Witch as well as taking to the mainstage at last year’s Indietracks Festival. Recent double-A single, I’m the Storm/Undone saw them team up with Everything Sucks Music; harnessing their throbbing bass-lines, complex beats and new wave influenced guitars to their most emotionally honest lyrics to date. A recent sold out show at Bermondsey Social Club confirmed GHUM's reputation as one of the most exciting new bands London has to offer, and an act you don’t want to miss.

Alex Chilltown is the musical moniker of suburban Londoner Josh Esaw, who started sharing his music with the world back in 2013 and has been making textural, hypnotic, indie-sadcore ever since. Alex Chilltown's music explores ideas of self-identity and how we can interpret what all the noise around us really means. Josh has always been joined by a revolving cast of musicians to make his musical sketches come true, culminating in the 2017 EP, Eaten Up By Nothing, which saw them catch the ear of everyone from Gold Flake Paint to The Pains of Being Pure at Heart.

With new material coming rapidly onto the horizon, Alex Chilltown is ready to achieve his musical ambitions to embrace complex, weird, and messy ideas, and one day debate Matty from the 1975 on the merits of postmodernism. Unique, intriguing and just a little bit odd, a trip into the world of Alex Chilltown is one well worth taking.