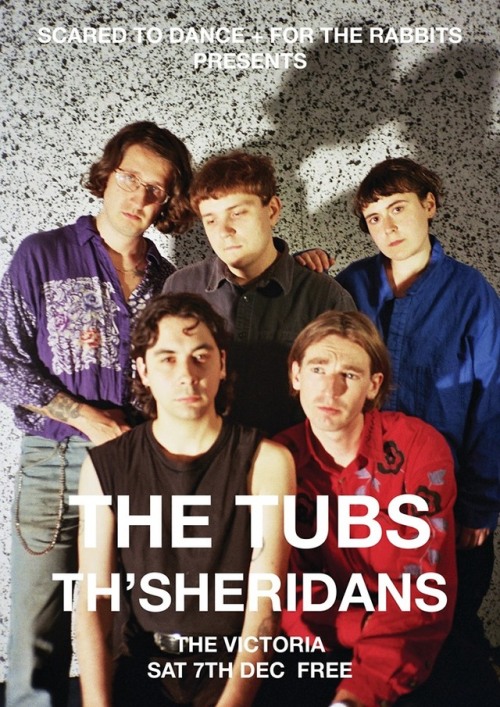 The Tubs headline the Scared To Dance and For The Rabbits gig night at The Victoria. Support comes from th'sheridans.

The Tubs are the new project formed by of Owen ‘O’ Williams and George ‘GN’ Nicholls, best known as two of the primary songwriters in Joanna Gruesome. Also featuring members of Flowers and Garden Centre, The Tubs have impressed live audiences supporting the likes of Flasher, Porridge Radio and Public Practice, and the band recently shared their debut single Silver Moon.

Citing an eclectic mix of influences from British folk to post-punk, perhaps the sound that most comes across in Silver Moon is the sort of jangling guitar music, more often seen emanating from Australia via the likes of The Goon Sax or Terry. While this is only the start for The Tubs, this already feels like the start of something truly exciting.

th’sheridans are the London-based duo consisting of Adam Sherif and Julia Oertli. The band describe themselves as a “DIY incongru-pop outfit” and are inspired by food, dating, small towns and “using radical softness as a response to everyday racism and sexism”.

There’s a winning simplicity and honesty to the music th’sheridans make; at a time when everything is loud and frenetic, they offer quiet contemplation and a moment away from the churn. Equally influenced by folk, riot grill and Klezmer Music, their live show promises everything from car boot sale drum machines to sassy high kicks and is entirely unmissable.

You can get your free tickets at DICE.