the other night i watched Town Bike punk the fuck out of Shoplifters Of The World. it was AWESOME
halo my middle, a hula hoop hug
Top

this is their cover of 'jeane', which I thought may be of interest to some

I thought I wouldn't like it, but it turned out that I did like it... very much

this is their cover of 'jeane', which I thought may be of interest to some

I thought I wouldn't like it, but it turned out that I did like it... very much

That's really ace. Mind you, Jeane is such an amazing song, isn't it? I reckon The Vengaboys could do a half decent job of it.
Fuck your tea room
Top

It was hard but necessary.

I began a love affair in 1983 which ended in 2011. I saw Morrissey live for the last time at his Dunoon gig. I'm afraid, for me, the old dog just doesn't have 'it' anymore when playing live. It's a tad like watching a 3rd rate Smiths cover band, peppered by some disinterested Morrissey caricaturist. Despite having tickets for Dunfermline, Hawick and Inverness - after Perth and the fateful Dunoon. The die was cast.

I had booked the Scottish dates, in the vain hope that despite the previous 2 lacklustre tours (comically referred to by me as the Take The Money and Run Tours)- he would confound me, and make me love him again? He failed, rather miserably (he'll be pleased to know).

Views about whether he should play Smiths songs, or not are highly personal and emotive. When touring as Morrissey I don't believe he should. 1. He's not The Smiths. 2. The fall out, financial and legal disputes that he won't let go of continue to tarnish The Smiths legacy, and 3. His current cock-rock band seem intent on killing my adpotive children-of-song in front of me. On this tour, I will give the band credit for I Know it's Over and Meat Is Murder (although it does seem that Morrissey is trying to eek every drop out of his down payment for that large cymbal). Both songs just had me transfixed with joy but annoyed at the same time. 6 Smiths songs and a cover version in a set that lasts 1 hour and 10 mins, including encore, c'mon? If he was doing a 'Morrisey plays the Smiths' then somehow that might just be different, but I wouldn't go and see it. In the same way that I didn't go the the '89 re-union of The Velvet Underground. Cash Cow, anyone?

The set-list was poorly sequenced and the song choice very un-hit. The joy of Ouija Board, Ouija Board cannot be over-stated. A proper hit. He did play other hits but he has played them at every gig for the last 8 years - it would have been nice if he dropped them in favour of hits that his fans haven't heard live for a very, very long time. It has to be said that the 3 new tracks are damn fine, and Action is My Middle Name, is a sure fire winner in my book. Despite moments of joy, it just wasn't uplifting enough. His between song quips, when he could be bothered, were maybe 6 years old? Deary, deary me.

The best part of this tour for me was meeting people on the Strangeways bus that followed the Scottish dates. Now, as lovely as everyone was, they really shouldn't be the highlight, should they?

In Dunoon I consoled myself with dark rum, said my goodbye to Morrissey on the live stage, and lost 2 hours on the bus home. Yikes! I know it may sound comical but I was genuinely upset; knowing that this was goodbye.

I know how you feel. I walked out halfway through one of his gigs and the Roundhouse a couple of years ago. I'd queued for nine hours in the pouring rain and when i got in I was just...I dunno. Happens to us all, I think. The Morrissey I loved was long gone before I was old enough to even be into his music.
five to six, that's what the time is.
Top

I was really impressed by Moz's comeback in 2004: the two shows I saw that year (and the first time I saw him in 2002) were electric - in no small part down to the crowd, of course. Plus the album was one of the most consistently strong he's ever done post-Smiths imo, and he was actually having hit singles to boot! Enjoyable time to be a fan.

But an album later and he did rather seem to be... back on the treadmill. I saw two of his Palladium shows in 2006, neither of which was anywhere near as good as the earlier ones, one of them downright poor. Since then he cancelled a show I had a ticket for at the Roundhouse, I missed him at Glastonbury... and I can't say I'm really fussed. It's a shame, but at least he had (as far as I'm concerned) an exciting, creditable spell for a while.

A colleague of mine told me she had to turn the Glasto coverage off because she couldn't bear to watch: "he used to be young and beautiful!" Uninspired performances aside, I think he's actually wearing his craggy fifties quite well, purely in terms of his looks...
Twitter / Mixcloud / Everything else
Top

I went to one of the Albert Hall gigs in 2002 and it was just incredible - I never thought I'd see him. By the following tour, when I saw him a couple of times in London and Birmingham, I'd already started to lose interest. There just wasn't the same buzz.
★ Cat Smell ★ The Give It Ups ★ Fall Out Make Up ★
Top

As long as the hand...
Daniel & Norbert now on Twitter - @Dentressangular

Out now on Woof Trade.
Fuck your tea room
Top

Can't think what brought it on. 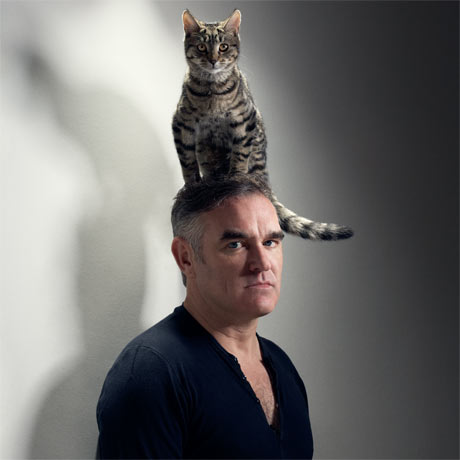 Sixteen, clumsy and shy
I went to London and I
Booked myself in at the R
SPCA
There ain't no-one gonna turn me round
Top

I wonder if the dog in question had an Alsatian cousin? GEDDITT???!!!ONEONEONENonene111!!!!!
Fuck your tea room
Top

David Tseng who runs MorrisseySolo.Com was by all accounts thrown out of a gig in Copenhagen just for being in the audience.

In the days when he was hopelessly poor...
Top

Guess that puts the kybosh on my chorizo wrapped in tinfoil gag for the Vicar Street gig so.
There ain't no-one gonna turn me round
Top