Urban wildlife, y'know, like badgers and hedgehogs and that

Urban wildlife, y'know, like badgers and hedgehogs and that

I got home from the pub last weekend and there was a hedgehog outside my house! I love hedgehogs and their little snuffly noses. I wish you could stroke them.

Badgers fucking rock. I've never lived near any though. Well, not that I know of.

Isn't it the most brilliant thing when you see a fox just walking down the street in the middle of the night?

I like it when I'm walking home and I'm being stalked by a fox, like the same one will keep appearing in my path. So I don my hunting garb and try chasing after him through the streets, singing Cope's Reynard the Fox.
Top

I see loads of foxes near my flat, especially late at night (unsurprisingly). I must've seen ten or more since I moved there. Where do they go during the day? I live next to a park, but it's very open. I don't think there's anywhere hidden they could go.
http://halfmyheartbeats.blogspot.com
Top

Also, there is one fox who lives in my neighborhood. I imagine he's a celebrity because there aren't many foxes where I live. He turned up post-hurricane a couple years ago.

Unless maybe it's a bunch of foxes who look exactly alike.
Top

There are always loads of rabbits and squirrels hopping around outside my work (although it's getting a bit too cold for them now). It's the best thing about the job by far!
Although there's also quite a lot of roadkill which is slightly LESS heartwarming... there's a big dead badger by the side of the road at the moment.
lardpony - vom vorton - vowl sounds
Top

Badgers knock you off your pushbike. They are EVIL!
The horses just don't gossip anymore
Top

Ooooh. I saw my first ever marsh rabbit last month. I'd never seen one. Maybe that's not urban though being as it was in a marshy area.

I credit seeing that rabbit to my marsh rabbit call. I've finally perfected it.
Top

We've got more foxes than I ever thought possible in our back garden. When we used to smoke out in the garden at night, we would often see one or two running past, but there was one night I watched them from the kitchen window and there were four or five of them playing in the garden, like play fighting and stuff. We see even more of them now than ever. When we first started going out at night, they would run off, but since we were always standing in the same spot they kind of became used to us and would come within a metre or two of us, like they were ignoring the fact we were there at all.

This is the best time of year for animals in our garden - foxes galore, and cute squirrels doing acrobatics all over the trees. We only get the occasional hedgehog, though, and I've never seen a badger or anything.
we'll be god's tiny carrier pigeons

i have to ride passed this lake on my way to school every day. and there are always a bunch of Canadian geese hanging around, making funny-looking turds.
Top

We have a lazy fox who turns up occasionally, I like him because he doesn't look all mangy and skinny like urban foxes. He's a bit of a porker and just scratches his ass, sniffs alot and ignores my cat. Our squirrel secretes nuts around the garden and has an ongoing battle with the cat, who just makes herself look like an arse whenever he triumphantly escapes for the 19,012th time. She always comes in and just sits on the settee looking all miserable after that happens. No badgers or hedgehogs. Did have a heron recently though on top of the tree in neighbours garden, that was quite exciting. It was bastard huge!
Top

Re: Urban wildlife, y'know, like badgers and hedgehogs and t

humblebee wrote:I got home from the pub last weekend and there was a hedgehog outside my house! I love hedgehogs and their little snuffly noses. I wish you could stroke them.


just for you, pete: 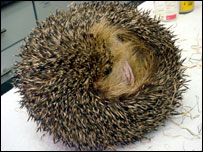 The way he curls up into a little ball, to inflict serious injury or blindness on predators... it's so *cute*!
Underachievement as Art
Top

it is! i also thought it was cute that he's on a diet like the atkins diet cos he's a bit pudgy.

i've never seen a hedgehog in real life. that's probably a good thing because i'd want to pick up the cute little thing and end up injured or blind.
tell me how good it is / to wake from a bad dream / and have someone there and I will tell you / how butterfly wings stay dry in the rain
--
stolen wine social
Top

A fox sniffed my knee once.
Best moment of my life that was.
particularly the headers
www.theswapsies.co.uk
Top

We have a fox that lives in our inner city garden. It loves removing plants from the pond and raking up patio pots. He sleeps on our shed roof in the day where he lives under a large ivy bush. Nocturnal it is not. I think it thinks it is a cat.

We did have a bat but haven't seen it this year. I have seen more wildlfe in Hackney than in the countryside such as a Sparrowhawk eating a pigeon on the tree outside my garden window in my old flat - having canals and the marshes help. The size of the carp in there. I saw a Woodpecker the other day too! No kingfishers as yet though.

They have moved a large number of canal dwelling speices into the nearby river as part of the 2012 preperation as well. Animals are all go round here!
Records I Like - The Culture Bunker
Top

I recently saw a fox on the train platform. It jumped down on the tracks and into the bushes where 30 seconds later came this noise I can only dexcribe as some sort of foul-ish death rattle. I wouldn't like to get shouted at by whatever type of animal that fox snuffed. Unless the noise was the fox.
Top

Just passed a pied wagtail bobbing on the concrete on my way to work. Great way to start the day. Sooooo cute.
Sarcasm was the lowest form of wit. Now there's you.
Top

Florida urban wildlife is the excitingest:

We didn't harass or entice them, honest. That's illegal.
Top

Do forgive me, Ms Boutique, but that doesn't look terribly urban... or is there a McWalmart hiding just behind those trees?
Underachievement as Art
Top

I saw a cock pheasant running down the road on the way into work this morning. I felt awful for it - the poor bugger looked terrified. I figure it must have strayed there from the nearby fields (I live right at the edge of town) but with a pheasant's brain:body size discrepancy I wouldn't be surprised to see a pile of feathers there later :(
Smart Patrol!
Top
Post Reply
63 posts