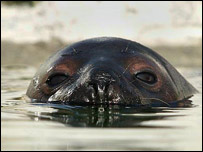 This seal swam to Africa. They rescued it and sent it back off to the Arctic. It turned round and went to Spain. Can't say I blame it.

Apparently, you can swim with seals. They look so appealing, big, big eyes and fluffy coats. I wonder if they bite much?
Top

Has anyone seen the baby seals on Autumnwatch?

Autumnwatch keeps being on when other stuff is on.
It's so frustrating!
Last night Tru Calling, Autumnwatch AND How To Look Good Naked were all on at the same time.

I like a good seal though.
Although I prefer a good sealion.
I even have a badge that proves it.
Top

Ooh, apparently there is going to be an episode of autumnwatch about urban foxes in Glasgow. I want to see that. Does anyone know when that might be on?

Sorry, you can go back to talking about seals once someone has answered my question.
we'll be god's tiny carrier pigeons

I think you've missed that, Lyns. They've had the Glasgow foxes on every night, but last night the bloke who was filming them seemed to be summing up.
Underachievement as Art
Top

I don't know about foxes. Or Autumnwatch. If you like it, though, I will pretend to like it too.
Top

Lyns, you might be able to watch the Glasgow foxes here -

I can't as my arsey laptop won't let me. But then I get to see the foxes every night in my bin store, so I'm not that fussed.
Top

I LOVE YOU, ANORAK. Have you got any nice fish??
Top

Cuh, I can't find the actual foxy show, just a preview. They've got a fox called Jamie, though. That made me chuckle.

Seals are lovely. I like seals.
we'll be god's tiny carrier pigeons

What about a seal watch in Glasgow? There's at least one that kisks about in the Clyde.
Top
Post Reply
10 posts • Page 1 of 1