Astrophysics and astronomy and space things

Astrophysics and astronomy and space things

It's 50 years since Sputnik and quite frankly, the whole world changed in a good good way.

So lets have a thread dedicated to all things outer space!

I really want to go into space but fear that I've been born 5 generations too early, however, I do think that we will find out what life is like on other planets in the next 20 years! There's plenty of candidates for evidence in our own Solar System! What is happening beneath the icy surface of Europa *right now*?

It's completely impossible to imagine how life will evolve on other worlds which is the beauty of it.

Whilst I'm here, has anyone else ever tried to make a little rocket? You can get kits but me and two friends tried to make one when we were 15 - it was called "Apus 1". The propellent mix was something that we found off the intenet and made out of stuff you can get from garden centres.

Launch day came, and we'd mounted it on a plastic stand from a kit rocket. It burnt through the plastic stand, flopped on its side, moved 5 feet along the ground, and spat burning sulphur all over the lawn.

The google holiday logo today was in celebration of Sputnik, but my chum Aref-Adib thinks it looks like War of the Worlds 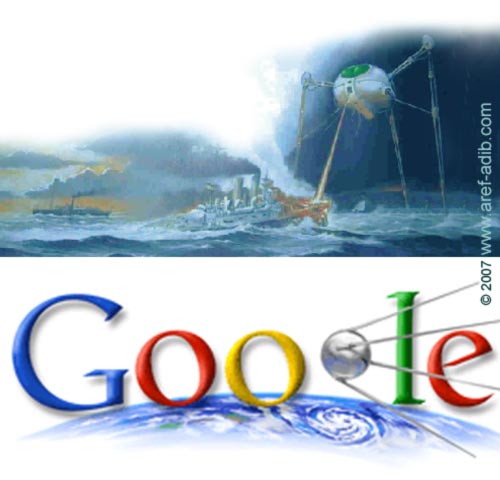 How many moons has Saturn got now?

When I was into space when I was little it was 14. Then years later I had another look and there were 26! They reckoned they were finding new ones all the time.
Underachievement as Art
Top

Saturn is pretty much the greediest planet around.
Top

60 according to Wikipedia, with three more hypothetical ones (there's evidence for their existance but havent been spotted yet). Cassini discovered a few more this year.

Most of them will be little dull rocks though. Titan's the biggest and most mysterious. My favourite is Mimas because it looks like a Sloe berry.
And by me, I mean, Flexo.
Top

i was thinking the other day about how i have always just assumed that humans should strive to travel into space. it just always seemed so obvious to me that this is the greatest goal for humanity. it honestly causes me great sadness that i will probably not live to see a time when ordinary people can go into space, or when there is a base on the moon or even mars. i know that makes me seem pretty cold heartedÃƒÂ¢Ã¢â€šÂ¬Ã‚Â¦

nasa's astronomy picture of the day is a fantastic page: http://antwrp.gsfc.nasa.gov/apod/astropix.html

If we ever win the lottery, I am totally going into space. I probably have to quit smoking first, right?
we'll be god's tiny carrier pigeons

You should be fine - I'd shop around for the best deal though. "well Russia have promised to send me into space for Ãƒâ€šÃ‚Â£1 million, and they've sent me some flowers - can you do it for cheaper"

I haven't had a fag in two days, so I'm well on my way to space.
we'll be god's tiny carrier pigeons

I've got loads of beautiful space pictures in glorious high resolutions thanks to NASA. I'm going to shrink a few to post here, but everyone really should go to astronomy picture of the day for the many awe inspiring images (there was a really nice one of andromeda yesterday)

(i think this was from beyond saturn look in towards the sun, so probably one of the voyagers or something - i really should label these things better)

and finally, a Hubble Deep Field image, nearly everything in this picture is a galaxy, which still blows my mind every time i see it:

(appologies to anyone with a slow connection!)
Sun like honey on the floor,
Warm as the steps by our back door.
Top

I go there too, there are some absolutely beautiful pictures. I love space and stargazing.

I read a lovely article about how you can use reflected light from dust clouds to build pictures of supernovas which were originally seen from earth hundreds of years ago - so you can re-view explosions like the one that caused The Crab Nebula. Amazing.
And by me, I mean, Flexo.
Top

That picture of the Sun behind Saturn (taken by Cassini I think) is amazingly amazing. It is gloriously, errrr.....glorious.
Top

So maybe this goes here and maybe it doesn't, but today is the 22nd anniversary of the Challenger exploding.

I was in sixth grade, and it was pretty normal in Florida to take students outside to watch those launches. It was pretty strange and confusing, and no one really told us what was going on though we'd all realized it. One of the girls in my class really freaked out because her father had been in the running to be the teacher who went up on that mission.

Also, I feel really old now that I've realized I was in sixth grade 22 years ago.
Top

Were you there watching it then, squirrelbou? That must have been a bit crazy.

I was having nightmares about it for days after it had happened and I remember writing a huge weepy piece for the school newspaper. I often wonder if it would have made such an impact today as it did all those years ago though.
The equation of poetic with administrative talent was often less perfect in practice than in theory
Top

Yeah! We were out there watching it. I sort of always forget that it's not the case with everyone to have seen it happen like that.

I'm not sure it would be such a big deal today. I wonder if teachers still even bring students out to watch those launches?
Top

If it hadn't happened, would we be living in moonbases by now?
Top

frogblast wrote:I've got loads of beautiful space pictures in glorious high resolutions thanks to NASA. I'm going to shrink a few to post here, but everyone really should go to astronomy picture of the day for the many awe inspiring images (there was a really nice one of andromeda yesterday)

I didnÃ¢â‚¬â„¢t know that this thread existed! Yeah! I love space, galaxies, supernovae, red giants, white dwarfs, pulsars and constellations. My favourite constellations? Cassiopeia and Orion- two of the brightest and most beautiful groups of stars in the night sky.

I also love Sir Patrick Moore (what a colourful character) and Sky at Night is my favourite series on BBC. I enjoyed so much that episode the other day when him and his team were watching the spectacular phenomenon of Perseid Meteor shower from MooreÃ¢â‚¬â„¢s garden. He was lying in his deck chair and talking about meteors, comet tails and other amazing things. It was so funny to hear teamÃ¢â‚¬â„¢s cheering every time they saw (by a means of a telescope) a meteor burn up as it entered earthÃ¢â‚¬â„¢s high atmosphere.
Space is fascinating, isn't it?

Please keep on posting beautiful space pics (they are breathtaking) and other stuff on this thread.
I slice the surface here beside you/Lungs filled liquid yell I love you/Sound moves further underwater
Deep and dark my submarine bells groan in greens and grey/Mine would chime a thousand times/To make you feel okay..
Top

I saw him on a program where they took a bunch of London kids out to Norfolk so they could see the stars, and the teacher asked him "what can I say to them to get them excited about astronomy"

"you needn't say a thing, the sky itself will do that."

Such a hero of mine. And he was gamesmaster!

I don't know what to make of this

http://www.weebls-stuff.com/toons/patrick+moore/
And by me, I mean, Flexo.
Top

I have a stereotypical hero in this category. I freaking love Carl Sagan.