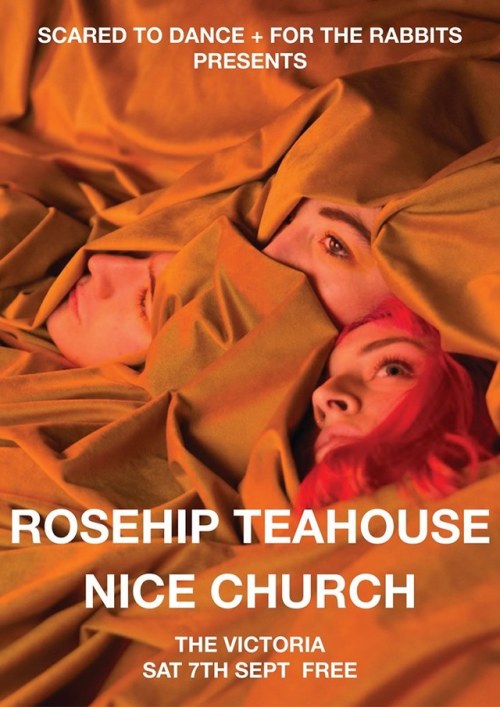 Rosehip Teahouse headline the Scared To Dance and For The Rabbits gig night at The Victoria. Support comes from Nice Church.

Hailing from Cardiff, Rosehip Teahouse, started life back in 2015 as the bedroom-pop project of guitarist and vocalist, Faye Rogers. Now expanded into a full-band, they have impressed with their sparkling take on DIY-pop, which has seen the band pack out their own headline tour and bag a high profile slot at Indietracks.

Musically, Rosehip Teahouse inhabit a world of melancholic beauty. Recalling the likes of Let’s Buy Happiness or a less frenetic Mothers. A band in that thrilling early stage; full of creativity and fearlessness, simultaneously making you long to hear what comes next and simply enjoy where they already are.

Born in a South Edinburgh barn circa 2015, Nice Church are ever evolving collective of musicians split between Scotland’s two biggest cities, with influences as diverse as Stanley Brinks, Erasure and Cats (the animals not the musical). They first emerged back in 2018, with their debut album, Chord on Cord, a record they followed up this April with their self-titled second offering.

An eclectic collection melding elements of anti-folk, slacker rock and anti-folk, Nice Church saw the band expand both their ambition and their musical horizons. Paired with a comedic pessimism that came up with song titles like Everything Is Terrible and The One Day the Sun Came Out, Nice Church are a delightful and defiantly independent treasure.

You can get your free ticket at DICE.