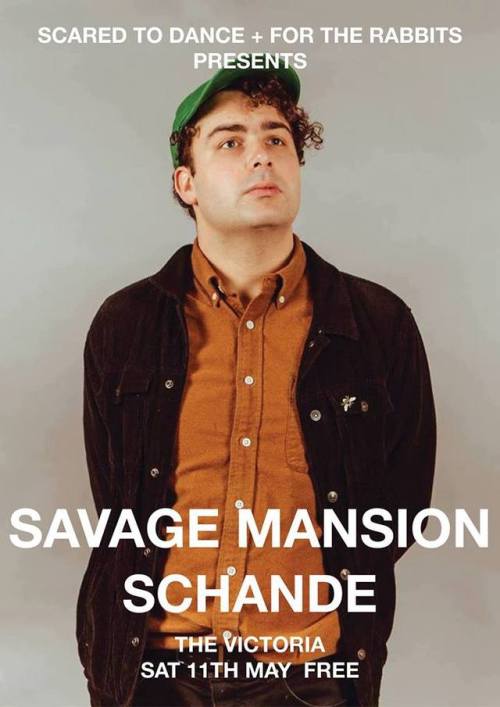 Savage Mansion headline the Scared To Dance and For The Rabbits gig night at The Victoria. Entry is free and support comes from Schande.

Savage Mansion is the current project of Glasgow-based purveyor of scuzzy slacker rock, Craig Angus. Originally working under the Poor Things moniker, Craig became a well established figure on the Glasgow DIY-scene, carrying much of the excitement and energy from that world into his own musical output. After crashing into our musical consciousness with debut EP, Document, back in 2018, Savage Mansion’s place at the forefront of British guitar-music was cemented with the sparkling debut album, Revision Ballads, released back in February on Lost Map.

Revision Ballads is an album unafraid to wear it’s influences proudly for the world to see; The Velvet Underground’s no-fi swagger, Pavement’s easy, sing-speak vocals, R.E.M.’s shimmering guitar tones. Lyrically the tracks are literate and often quietly comical, flittering from Elwood’s personal musings on childhood tormentors to the more politically charged Dog O’Tears, Craig’s rambling response to the rise of xenophobia on our streets. Breathing new life into their timeless influences, Savage Mansion might just be your new favourite band.

Schande started back in 2002 as the solo project of principle songwriter, Jen Schande, before quickly expanding into a full band courtesy of a steady stream of mostly three-lettered named band members (current bandmates Gio and Cat are prime examples). Their latest offering of driving-melodic indie rock came recently in the shape of a brand new EP, Pedigree, released via Everything Sucks Music.

Pedigree was penned during a period where Jen was struggling with her mental health issues, a theme explored across the record. Clearly You Do muses on the isolation affect of anxiety, Fancy Trolley reflects on the exhaustion that comes from panic attacks, while Community Theatre is a celebration of seeking help. While Pedigree, comes from a place of darkness, it is not a record that wants to glorify that, instead it is laced with a hidden positivity, the feeling that we all deserve to be hopeful that things can get better. With that positive, determined attitude to overcome challenges and struggles, what’s next for Schande? “What isn’t?”