by crystalball
I was watching one of those late episodes yesterday, from 1991. It was quite unsubtle and not very satisfying but I couldn't help myself. I just love Columbo so much.

It was inevitably formulaic but so much fun and Columbo himself was such a great character: unassuming, naive, open, someone you'd happily talk to.

Any other fans?
by alongwalkhome
I freaking LOVE Columbo--esp. the 80s ones that were like a slightly edgier Murder She Wrote (which I also love when I'm sick in bed w/a cold) w/the same bad hair cuts.

I esp. love when it registers on an actor's face that he can't quite tell if Peter Falk is talking to him because of that freaky glass eye situation.

Tangentially: I absolutely LOVE that whodunnit spoof movie, Murder by Death. The cast is unbeatable: Falk, Peter Sellars, Alec Guinness, David Niven, Maggie Smith, Nancy Walker (Rhoda's mom!!). And that brilliant cameo by Truman Capote. Oh, man, when I was a kid this flick was a guaranteed ROFL. I may need to buy it. They don't show it on TV all the time like they used to. [/img][/i]
by crystalball
Hee! Murder by Death is so much fun. My dad used to make us all sit down and watch it when it came on the telly and I was the only one in the family who laughed as much as he did. I was always my dad's favourite. :)

I love the '70s Columbo stuff more than anything but that's mostly because I've got them all on DVD and keep going back to them. There was a particular time in the '70s and early '80s when the writing was just brilliant: really tight, witty and surprising.

I love it when Columbo gets all excited about new technology, like 8-track tape and VHS players!
by schlump
i think i'm more of a peter falk fan than i am a columbo fan, but i've been toying with watching some all the same. has anyone seen Ãƒâ€°tude in Black? it's the one with john cassavetes in. apparently it's brilliant.
by alongwalkhome
I watched one yesterday w/Shatner in it! He played a radio talk jock. It was pretty terrible as far as plots (and acting) go, but was the pinnacle of 70s schlock and I loved every minute.

crystalball wrote:Hee! Murder by Death is so much fun. My dad used to make us all sit down and watch it when it came on the telly and I was the only one in the family who laughed as much as he did. I was always my dad's favourite. :)

it's also got Elsa Lanchester (born in Lewisham) in it as the Miss Marple character, she was the Bride in 'Bride of Frankenstein', and Eileen Brennan plays Sam (Peter Falk) Diamond's long suffering secretary

the female actresses in this all get to be funny too which is at should be rather than merely playing foils to the male leads... Maggie Smith is, and I use this phrase without irony or fear of being jeered at, delicious as ever, darlings

it's such a treat of a film, from the Charles Addams drawn (and animated) opening/closing titles (he also designed the poster) to Capote's voice which sounds like Droopy from the cartoons gone all swish (small detail: Capote's character's house number and name is shown outside the house on a plaque as '22 Twain'... well, it made I smile)

it would work in a triple bill with 'Young Frankenstein' and 'Dead Men Don't Wear Plaid', I love this film so much, even if at times some of the jokes creak, but the for the most part it's box fresh, it's one of those films you don't want to end... I'm sure I'd written about it on here before but clearly not, anyway searching for that imagined post drew me here...

by crystalball
Gah, I missed it. Ooh but good timing with resurrecting the thread because my favourite Columbo was on yesterday: Ransom for a Dead Man - the second pilot. If they'd stopped the series there, I'd still love Peter Falk forever. Worth it for the scene in the diner with the bowl of chili alone: "It's the crackers that make the dish."

by squirrelboutique
Peter Falk's passed away!

schlump wrote:i think i'm more of a peter falk fan than i am a columbo fan, but i've been toying with watching some all the same. has anyone seen Ãƒâ€°tude in Black? it's the one with john cassavetes in. apparently it's brilliant.

Etude in Black is indeed amazing. I love Pete Falk in films too! Him and John Cassavetes were together in Mikey and Nicky- highly recommended. And of course, Wings of Desire which is one of my top 5 favourite films of all time. Peter Falk, as a fallen angel, is unbelievable. If you love film, Wenders and Pete Falk, you must watch it.. A few years back I read a review of Wings of Desire titled: Angels exist and Peter Falk is one of them. This is so so true... 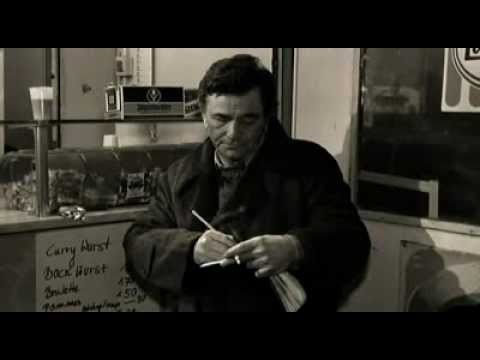 One of these days I will need to watch Wings of Desire again. An amazing, amazing movie!!
Peter Falk was a great actor and such a warm personality and nature.
All times are UTC+01:00
Page 1 of 1
Powered by phpBB® Forum Software © phpBB Limited
https://www.phpbb.com/