much derided, danny dyer has become a ubiquitous presence in british cinema over the last 8 years or so

born in canning town, east london in 1977 dyer got his first break in 'prime suspect' opposite helen mirren when he was 14

his first film was 'human traffic'

he's since cropped up in numerous roles all quintessentially 'danny dyer', the cocky, more often than not coked up, not afraid of a scrap twinkly-eyed every-geezer (his most archetypal role would be that of frankie in 'the business')

he reminds me of far too many people I grew up with and still see about in herts/essex (the north london commuter belt east end overspill synonymous with white van man, page 3 girls and dean gaffney)

quite why I've chosen to review dyer's career I'll leave up to you (appalled curiousity? a big girlie crush? a concern that actually he might be quite good?), but review it I have

most dyer movies I've seen he generally plays a lurid cartoon of himself, most dyer movies have him providing a voiceover for no other reason apparently than the filmmaker clearly feels the dialogue and images on the screen aren't enough to tell the story and so dyer can say things like 'dobbsy was a nutter, half of stepney high st up one nostril and the whole of shepherds bush market up the other...' and 'she was a right sort, I was up to me nuts in guts that night and she made me breakfast in the morning, full english, naturally'

or best of all 'this was the worst night of my life', cue shot of dyer covered head to toe in claret and with a sad face smoking a dunhill

invariably he does some drugs too, lots of drugs and he has some quickie sex and there's plenty of fighting 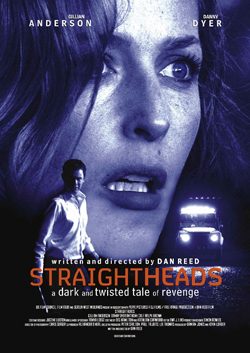 he plays adam, adam fits surveillance cameras and alarms, as the film opens he's doing this in the swanky pad of alice (gillian anderson), who's something big in the city, although it's not clear what she does, from what we can tell, she's very good at it

she comes home to find adam catching some rays on the roof garden, he watches her on the surveillance camera strip off and take a shower and then she invites him to a party (she's luckily got a suit in the cupboard that's just his size)

they then go to the party (stopping so she can have a piss by the side of the road), the party's in the country mansion of her boss, who's loaded and in a spaceage wheelchair and wants her to marry him... adam attempts to mingle... the waiters are all bald with white face make up... adam goes outside for a fag and for a walk around the grounds and alice comes and finds him and they have a quickie up against a tree

driving home adam announces that this is the best night of his life, they get stuck behind a jeep, overtake it, adam calls the occupants of the jeep 'wankers' and they speed off, attempt a snog and hit a stag

dragging the stag off the road, adam attempts to dispatch it with a wheeljack but can't, the occupants of the jeep appear

what follows is a brutal assault on adam and alice, adam gets the shit kicked out of him and alice is raped

all of that could've been cut from the film, the whole set up of alice and adam getting together and the party is like something out of a slick empty joe ezterhaus-directed sharon stone vehicle

the aftermath of the rape and assault would've made a far more arresting opening to the film, particularly the moment adam comes too and the supposedly dead stag suddenly rouses, clambers to it's feet and then escapes into the woods

both anderson and dyer are fine in these roles, but it's an oddly airless, claustrophobic film- there's some lovely photography of mist rising off wet woodland and murky farmsteads but the tension that impressively builds as the film progresses seems to snap and go flaccid as the film reaches it's violent conclusion

it would've been interesting to see neil marshall ('dog soldiers'; 'the descent') deal with material like this: the monsters within us rather than actual monsters

as it is, minus the computer surveillance, this film could've been some 70's exploiter albeit with a character in alice who refuses to be broken or cowed by her assault

this movie was pretty much written off on release mostly because of the presence of dyer and the violence it contains (mostly unseen but heavily implied), there's a lot of reasons to take this film to task but there's a lot to commend it too

I watched Football Factories International the other night, with Dyer trotting around Brazil getting shot at, meeting and greeting unhinged football hooligans and being Danny Dyer. He must have balls the size of church bells.

I am FOR Danny Dyer.
Top

Danny Dyer is a twat.
Top

it's one opinon, but I don't care for it
Top

I watched 'Severance' at the weekend and thoroughly enjoyed it. It's got a good cast and has some good laugh out loud ('I cooked it for the full hour') moments and some genuine jumpy bits.

Danny Dyer is very good in it and I enjoyed it so much I watched it again with the commentary (the director plus most of the cast including Dyer) which was very funny.

Dyer to appear in 'Enders?

I agree with the quoted 'Enders "insider". He'll be perfect because he's from the East End, still lives there and has the whole geezer thing going on. I also agree with nickydee but thats another story. He's clearly much more authentic than Shane "Redcoat" Ritchie who as far as I know has never appeared in any TV programmes with "deadliest" in the title.

Speculate then, what role will he potentially have? Bad boy comes good? Local hardman making Ian Beales life a misery with a protection racket? Pearly King? The options are dizzying.
My apple pies go off today.
Top

please not a gangster, I'd like to see him adapt the stoner persona (hey, it rhymers!) that he was so effective at in 'severance'

in fact why not staple the plot of 'severance' onto eastenders?

New found respect for the man.


"Mathew Horne is one of the worst actors I've ever seen in my life. He's just got nothing about him... No substance and no depth. It annoys me a bit that no one's clocked (noticed) that. I'm not trying to do anyone out of a pound note, I just think they're s**t. Mat is absolute rubbish." 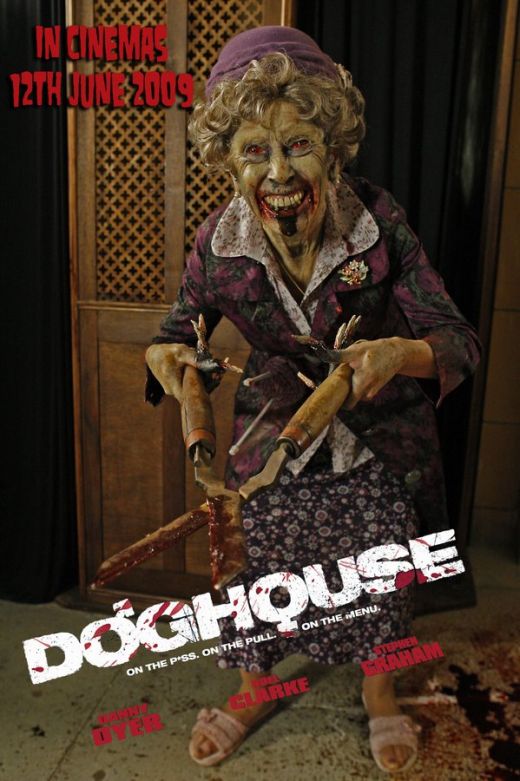 danny dyer's latest... he may well become the king of british tongue through cheek horror:

as well as our danny, this also features noel clarke (from dr who); stephen graham (from 'this is england') and lee ingleby (from all sorts of things) plus don beech from the bill, adele silva from emmerdale and romana from dr who

I imagine I'm alone in looking forward to this

Oi cobain geezer, get this up your hooter. this is bound to be good.

When the people are being beaten with a stick, they are not much happier if it is called 'the People's Stick.'
Top

JamieC wrote:Oi cobain geezer, get this up your hooter. this is bound to be good.

What? Who? Which?
Toot toot.
Top

roy smiles also wrote 'schmucks' about an imaginary meeting between groucho marx and lenny bruce, and he's written a number of other plays about real life characters (the goons, the python team, george orwell, general pinochet)

I dunno, I'm alone in this (on here) but I think dyer's got some acting chops and he's not as daft as all those 'danny dyer's world of naughty villains' programmes might suggest and he is funny as fuck, often intentionally
Top

That picture, to me, is not reminiscent of Kurt Cobain. But since I've got no stake in either individual, I may well find the film quite enjoyable.
Toot toot.
Top

fogofideas wrote:I dunno, I'm alone in this (on here) but I think dyer's got some acting chops and he's not as daft as all those 'danny dyer's world of naughty villains' programmes might suggest and he is funny as fuck, often intentionally

He's sick of not being taken seriously too:

I think moments from it will stay with me to the grave and beyond whether it was danny sharing a cheeky rioja with sir patrick more (danny = wine glass, sir patrick = half pint mug) and then danny summing up their meeting of minds with a heartfelt "beautiful" before telling sir patrick, "you sir, are a gentleman"... or danny meeting every footage he witnessed of a ufo or alien or even anecdote with an emphatic "fuck!"... his trademark pieces to camera where he questioned the veracity of ufo believers claims with a "I just don't know what to believe now"... narrating his meetings with crop circle enthusiasts and aetherians with the same 'have a word' cor fucking blimeyness he usually gives to meetings with bare knuckle boxers and throat stranglers... watching him freezing his bollocks off on top of various hilltops while hanging out with extremely undanny people who claimed to receive messages from outer space via cb radios... the film of a peekaboo grey alien at a window ("mental!")... to the final scene where he hangs out with a bunch of new age ufo enthusiasts in washington state and gets to see "fucking ufo's" and then provides (to camera while smoking a fag) a heartening and heartfelt tribute to believers that makes you realise just how cynical and knowing so much else of modern telly is... because essentially that's the essence of danny- supremely uncynical, possibly his undoing...

I watched that! It was ace, especially that last bit with those mentals who thought there was a big door in the side of a mountain that aliens opened up every night.

Dyer should learn to control his language, mind. There's no place for swearing in UFOlogy.
Fuck your tea room
Top

I actually winced everytime he swore, I think his cockney swagger and leather jacket put most of the ufologists at a disadvantage nevermind his factory floor language

I was impressed that he turned up at that hippy commune wearing a pink polo shirt... a true mark of an individual

the week after: lawrence llewellyn bowen on cage fighting
Top

I liked how he warmly greeted a stranger with "awright sunshine?"

also the contrast between the meeting with the alien-at-window guy ("fuckin' ell, why isn't this all over the papers!?") and then his realisation shortly after leaving that the guy was probably making it all up.
lardpony - vom vorton - vowl sounds
Top
Post Reply
54 posts